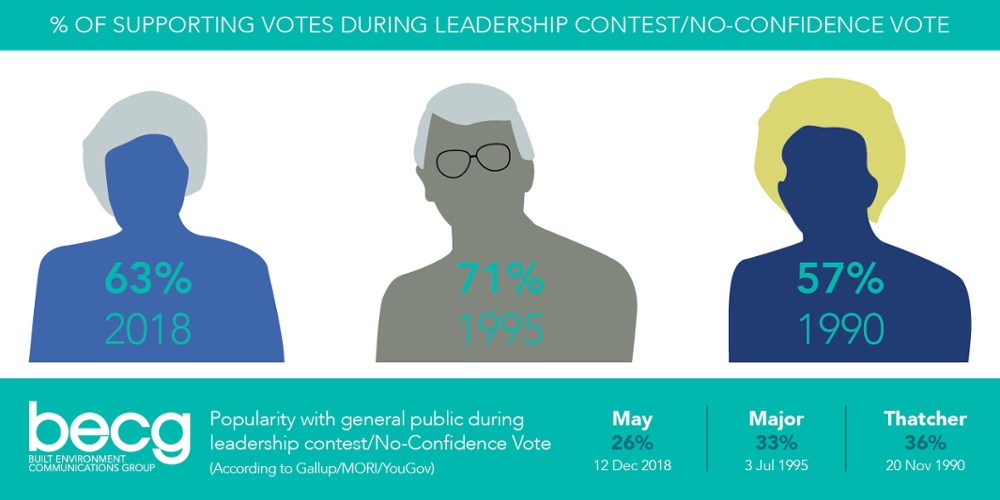 Week in Numbers – No Confidence Vote

On Tuesday 12th December, Sir Graham Brady MP, the Chairman of the 1922 Committee of Conservative Backbench MPs, declared that the threshold had been reached for a Vote of No Confidence in the Leader of the Conservative Party, Theresa May. To trigger a vote of no confidence, the 1922 Committee must receive letters of no confidence from at least 15% of Conservative MPs (48 MPs). Though not unfamiliar for a sitting Prime Minister to face such a challenge, the last time a no confidence vote occurred was the leadership challenge to John Major in 1995, or more renowned, when Michael Heseltine challenged Margaret Thatcher for the party leadership in November 1990.[1]

Wednesday’s vote witnessed a turnout of 100% of Conservative MPs. The Prime Minister survived by a margin of 83 votes, receiving 200 votes (63%) in support and 117 against. This outcome should not come as a surprise, given the present makeup of the Conservative Party, as at least 100 MPs are serving in the Government and of the remaining backbenchers, those MPs in support of Brexit are the minority. Compared with previous no confidence votes, Thatcher secured more votes than May, receiving 204 votes, though lower percentage (57%) whilst Major secured 218 votes (71%).

How did we arrive here?

Publication of the ‘Chequers Deal ’ in the summer initiated the submission of letters of no confidence, as the Deal was seen by Conservative MPs to have ceded ground on too many areas to the EU, specifically the EU having jurisdiction over Northern Ireland. The publication of the Withdrawal Agreement in November 2018 and the concerns towards provisions over the Irish border and regulatory framework between Ireland and the UK, led to a wave of no confidence letters being submitted by members of the Conservative, pro-Brexit European Research Group (ERG).

The key concern of MPs was that if the UK and EU fail to agree a Free Trade Agreement by 2020, the UK would stay in a customs union or ‘backstop’ with the EU. The only way the backstop can end is for both the UK and EU to unanimously agree to this. Opponents argue that this leaves the UK in a vulnerable position where future governments wishing to end the backstop will not be able to if the EU does not agree to as well. Although the Prime Minister insisting that the backstop would not be used, as she hoped a Free Trade Agreement would be reached, there was no guarantee that it could be achieved in time.

Despite initial speculation that the 48-letter threshold would be reached, the submissions stalled because of internal divisions within the ERG over how to remove the Prime Minister, with some favouring her resigning after Parliament rejected her Withdrawal Agreement, in a vote scheduled for 11th December. However, after vocal criticism from various factions and parties towards the deal, and the likelihood that it would be lost by a significant margin of three figures, the Prime Minister postponed the final vote indefinitely. This resulted in the second wave of letters going in, leading to the threshold being reached.

Whilst the Prime Minister may be heartened by winning the vote and cannot face another for at least a year, she still faces the challenge of having no majority of support for her Withdrawal Agreement, which is expected to be rejected when it finally returns to Parliament. Therefore, the current political climate is no clearer than before the vote of no confidence. The Prime Minister may have lost her functioning majority through the Democratic Unionist Party withdrawing their support over the backstop and, even if she unites her party, this alone will not be enough to function as a Government.

As legally enshrined in the EU (Withdrawal) Bill, the UK will leave the EU on 29th March 2019. If the Withdrawal Agreement is voted against and an eligible alternative is not passed into law by that date, then no deal is the likely outcome. Given the limited number of sitting days for Parliament until 29th March 2019, even if the Agreement was passed on the vote, the successive debates required may exceed the available timeframe. Though the UK could seek an extension to the Article 50 process, it is unknown whether Theresa May has the political capital to achieve this. According to YouGov, during the height of the no-confidence vote (11th-12th December), Theresa May was polling a 26% support from the general public. Whilst this may be expected against the current political climate, when compared with polls conducted by Gallup on 20th November 1990, during the height of Thatcher’s leadership challenge and 3 July 1995 during Major’s, we see a significantly more positive reading of 36% and 33% respectively.

The Prime Minister has been unable to gain any changes to the Withdrawal Agreement from the EU, who have resolutely ruled out further negotiation, with the President of the European Commission, Jean-Claude Juncker bluntly outlining that “we don’t want the UK to think there can be any form of renegotiation, that is crystal clear. We can add clarifications but no real changes”. He added that “there will be no legally binding obligations imposed on the withdrawal treaty.” Most significantly, the EU took the unprecedented stance of rescinding a previously agreed commitment with the UK for the backstop to “only be in place for a short period”, as well as removing comments that the backstop “did not represent a desirable outcome” for the EU. These actions, combined with negligible domestic support for the existing Agreement, means it is increasingly likely that the UK will leave the EU on World Trade Organisation terms, or ‘no deal’ as it is commonly referred to, on 29th March 2018.

After surviving the initial ballot in 1990, after taking soundings from her confidants that she would be unlikely to win a second vote, Margaret Thatcher took the decision to resign as Prime Minister not a fortnight later. Though John Major secured an overwhelming majority against his challenger, John Redwood, after close to two decades in government the Conservative Party was on track for a significant defeat at the forthcoming General Election against a resurgent Labour Party.

As far back as the Party Conference in September 2018, the Prime Minister’s overtures to her domestic agenda post-Brexit were met with a sense of profound irony that she would perform any function once Brexit had been delivered, whenever that does occur. Even this week, it was reported that a member of her own Cabinet, the Attorney General, Geoffrey Cox QC MP, had allegedly expressed the view that “we’ll remove Theresa May next year”. The exhaustion and apparent vacancy of political imagination that marked the death-throws of Major and Thatcher’s premierships are all too familiar to the present political climate.

Whilst no-one has vocally marked themselves as a challenge for the premiership and Conservative Leadership as occurred for Major and Thatcher, the political jostling amongst rival candidates is more extensive than for May’s predecessors, with a dozen candidates at least gauging support for a future leadership bid. Whatever degree Theresa May succeeds in delivering Brexit, there is little appetite, either nationally or politically, for her to “go on and on”.

[1] The noted difference in these contests was that whilst Margaret Thatcher and John Major were challenged by another Conservative MP, Theresa May stood unopposed. The procedure for Leadership contests within the Conservative Party was also amended in 1998, so May’s contest operated under different rules to Major or Thatcher’s.

A new dawn for combined authorities?