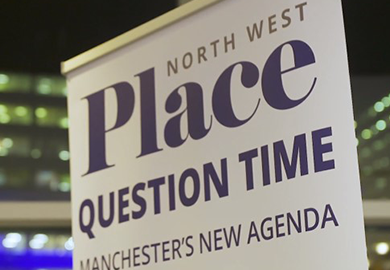 Greater Manchester’s future growth will be underpinned by investment in the city region’s transport network, carbon neutrality and further devolved powers, according to its civic leaders at a BECG sponsored Place North West Question Time event, held earlier this month.

The event saw GM Mayor Andy Burnham; Chief Executive of the Combined Authority, Eamonn Boylan; Manchester City Council leader, Sir Richard Leese and Chief Executive, Joanne Roney sitting alongside each other for the first time as the city region’s property industry quizzed them about what Greater Manchester’s future looks like.  They were joined by Savills director, Jeremy Hinds and Edna Robinson, Chair of the People’s Powerhouse.

Issues including affordable housing delivery, the Greater Manchester Spatial Framework, regenerating brownfield sites, the changing political face of the council, cycling in the city and difficulties for commuters were all raised during the two-hour debate.

Consensus was the order of the night with all four civic leaders finding common ground on what issues needed to be addressed for Greater Manchester to achieve its growth ambitions over the next decade.  Despite frustrations from some of the audience about delays to the GMSF, low rates of affordable housing delivery, the difficulties of cycling around the city and the perception that Manchester is seen as a ‘closed shop’; it was clear that Greater Manchester’s leaders feel they are working together to improve the city region’s built environment and make sure that Manchester sets the agenda for others to follow.

With an ambitious target to become carbon neutral by 2038, a residential design guide for Manchester that sets higher standards than competitor cities and England’s most advanced devolution settlement, the platform is already in place for Greater Manchester to succeed. The challenge to business from the panel is to innovate more, work harder to earn the trust of local communities and focus more on placemaking.

With Manchester to add 100,000 people and 65,000 jobs by 2036 and the panel pitching ‘crazy ideas’ for Greater Manchester from new linear parks, to underground railways, free public transport and banning cars from the city centre; the opportunities to create a better built environment seem to be as abundant as ever.