Southampton Airport, one-third of the AGS Airports group, retained BECG to provide communications and stakeholder engagement services in support of its runway extension proposals. Following the collapse of budget airline Flybe, Southampton sought permission from Eastleigh Borough Council to extend the northern end of its runway by 164 metres, in order to maintain its viability as a regional airport.

Your team had to fire up the general public to vote to save the airport. And, wow, they did it! The targeting was most effective and the results show the effect and impact. The staff at the airport are delighted, they have job security for the first time in a year. A large amount of that is down to your superb team.

Southampton Airport’s runway application faced significant opposition from a well-organised coalition of environmental and residents’ groups. As a result of their campaigning, Eastleigh Borough Council’s initial public consultation on the runway application showed that nearly 68% of respondents opposed the plans. These figures reflected the activity of a vocal minority rather than the position of most local people in the Borough and wider region, so BECG was brought on board to help manage the application communications.

The support, advice and expertise from BECG was absolutely central to us securing last week’s result, which has safeguarded the future of Southampton Airport. For BECG to have galvanised support in the way they did was a major achievement and we were lucky to have them on our side. 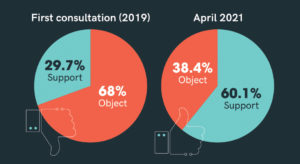