Can Boris get his mojo back?

The world may look unrecognizable from 2019, but Boris Johnson returned to some very familiar themes in his speech to Conservative Party Conference.

We had classics from the 2019 election campaign, including levelling up, delivering Brexit, global Britain, net zero, and his more recent, ubiquitous catch-phrase of Build Back Better (which had its own Build Back Greener spin off too).

There was also plenty of red meat for the Conservative Party faithful.  The PM spoke of saving the country from socialism, tackling “lefty human rights lawyers”, and ensuring that the UK remains competitive on tax and regulation.

In a typical year this would be standard fare at Conservative Party Conference. However, although it has been less than a year since his election victory, the PM addressed his troops as a much diminished figure.

Boris has always faced accusations that he was not serious enough to be Prime Minister, but the appeal of his personal brand was a key part in delivering electoral victory in 2019. He also enjoyed a great deal of public goodwill in the initial stages of the pandemic, particularly when he contracted the virus and was hospitalised.

However, in recent months the Government has often looked directionless, with a succession of missteps and U-turns – including the exam results fiasco and the delivery of Test and Trace. Meanwhile, he has been dogged by accusations that since his recovery from Covid he has failed to get a grip over his ministers – in particular those who might have an eye on his job.

The dictatorial approach taken by Government to social distancing measures (such as the 10pm curfew for pubs and restaurants) has also led to significant frustration amongst his MPs, many of whom are desperate to reopen the economy and allow businesses to restart.

The discontent surrounding the PM has stood in sharp contrast to Chancellor of the Exchequer. Prior to Covid, Rishi Sunak was little known to the public, but is now generally perceived to be the most effective member of the Cabinet and the front runner to become the next leader of the Conservative Party. Many of the initiatives designed to protect or save the economy have been released with infographics baring his signature, not the PM’s

Boris’ speech to the party, and reemphasis on his optimistic vision of the UK set out in the General Election, was clearly designed to refute the perception that he has lost a step. The PM even addressed it directly:

I have read a lot of nonsense recently, about how my own bout of Covid has somehow robbed me of my mojo. And of course this is self-evident drivel, the kind of seditious propaganda that you would expect from people who don’t want this government to succeed.

This vision was reinforced by new spending pledges to deliver on his pre-Covid agenda (particularly around sustainability) and transform the UK into the Saudi Arabia of the renewable wind industry. He also reached into his toolkit of Churchillian phrases to inspire the troops:

Monday was an attempt by the PM to return to classic, optimistic Boris. However, there is no escaping the shadow of Covid, and some Conservative MPs have criticized the content of his speech as belonging to another time and place.

The Conservative Party has always been notoriously ruthless, and never shied away from regicide when needed. The parliamentary and grass roots parties demand effective leadership above all else. Their patience is not inexhaustible, and unless Boris can rediscover his mojo and find a path to reopen the economy, whilst managing the risks of Covid, there remain big questions about whether he will address conference as Leader of the Conservative Party in 2021. 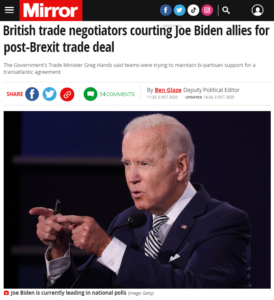 The BECG and Cavendish Advocacy teams may have missed out on the opportunity to spend three days in a conference centre, drinking warm white wine, but our fringe event programme was one of the most prominent at the conference – and tied into the key themes of Boris’ speech.

We looked closely at some of the key policy issues facing the UK, ranging from the US-UK trade agreement to the rollout of EV infrastructure, and were attended by both high profile political speakers and representatives of industry. You may have seen our scoop that the Government is already in discussions on trade with allies of Joe Biden in case he is victorious in next month’s election – and there were plenty of other great discussions throughout the day.

If you did not have an opportunity to virtually attend, you can watch them now, by clicking on the below button.