The May elections in 2018 saw significant change across London. Across the capital, one in every two councillors on the main planning committee were newly elected and 20 new planning committee Chairs have influenced planning decisions over the last year.

Our London Borough Planning Committee Decisions Research Document looks at every borough in London to assess their decision making in the 12 months since May 2018. Our focus has been on the main committees – those dealing with larger and more strategic applications.

Committees across London operate in different ways. Some, like Wandsworth, use their one committee to consider all applications – large and small – while others like Barnet preserve their main committee for larger applications and allow area committees to decide on smaller or household applications.

The general story is positive; pro-regeneration boroughs with strong political and officer leadership rank highly for approvals – Brent, Ealing and Hackney deliver almost universally positive determinations. Barnet, Tower Hamlets and Kingston – not seen normally as consistent decision-makers – have approved every single application recommended for approval this year. Bromley and Kensington & Chelsea remain difficult, while formerly pro-regeneration boroughs such as Haringey and Hounslow are starting to flex their muscles with some refusals.

For many, the number of large applications coming forward is extraordinarily low. Lewisham has considered just two applications all year – both for the same scheme – refusing initially and then approving a slightly amended town centre scheme later in the year. In Kingston, almost half of the committees have been cancelled due to a lack of applications ready for decision and a similar lack of activity is evident elsewhere.

In a year we have London Mayoral elections and major applications will start to become ever more political. Committees, some of whom will have new Chairs and members for the year 2019/20, will be under greater pressure to make tough decisions in a febrile political environment. The Mayor will also be reluctant – unless clear political advantage can be gained – to hold any hearings beyond Autumn 2019 and the first part of 2020 could see a slowdown in major applications. 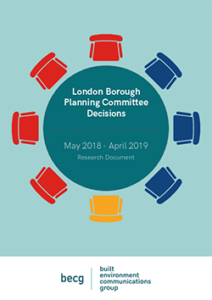